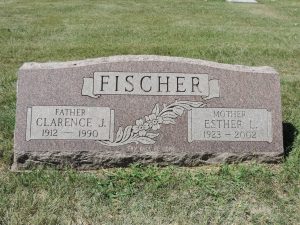 “Baker-Fischer Wedding Celebrated – Rudolph Fischer and Miss Louise (Schultz) Baker, both of Dixon, Ill., were united in marriage at 4 o’clock Wednesday afternoon by Rev. J. S. Leamer, who read the ring ceremony.  Mrs. Will Aument of Dixon was their attending witness. – Clinton Herald.”

“Harold C. Fischer – Harold C. Fischer, 66, 947 Dement Ave., was pronounced dead on arrival at KSB Hospital Sunday.  He was born in Rock Falls on Feb. 12, 1908, the son of Rudolph and Margaret (Gielow) Fischer.  He married the former Hellen Farley on June 6, 1929.  Fischer was a resident of Dixon for the past 35 years, was an employe of the Dixon State School and a member of the St. Anne’s Catholic Church.  He was preceded in death by one brother.  Survivors include his widow; one daughter, Mrs. Larry (Nancy) Walls, Aurora; three brothers, Rudolph, Rock Falls; Henry, Como, and Clarence, Grays Lake; one half-sister, Mrs. Tracey (Jean) Jones, Sterling, and two grandchildren.  Funeral services will be held at 10:30 a.m. at the Jones Funeral Home, and 11 a.m. at the St. Anne’s Catholic Church, with the Rev. Donald Ahles officiating.  The wake service will be held at 7:30 p.m. Tuesday.  Burial will be in Oakwood Cemetery.  Visitation will be held after 2 p.m. Tuesday.”

“JOHN FISCHER – John Wilfred Fischer was born near Rock Falls, April 8, 1916, and passed away in the late home at Nicols, Iowa, Saturday morning, Nov. 29, at the age of 14 years, seven months, and 21 days.  On May 7, 1906 (sic 1916), he was baptized into the name of the Tribune God and thereby made a child of God.  He lived near and in Rock Falls until several years ago he moved with his mother to Iowa.  He was a diligent and dutiful child.  In his school work he was exceptionally bright and diligent. During the years, that he attended Sunday school in the Rock Falls Lutheran church he was always an honor scholar, in attendance as well as in his work.  Thus he was in everything he was asked to do, punctual and reliable.  During the last several years he began ailing with a lingering and evil illness. All that could be done for him was done, loving care and medical aid but to no avail.  Bravely did he bear it all and continued in his school work always expressing his assurance that he will soon be alright again, but after two days in bed he was called suddenly and unexpectedly to his rest.  He leaves his sorrowing parents, four brothers, his grandparents and a host of other relatives and friends.  May ne now rest in peace and enjoy the blessing of his heavenly home.  The body was brought overland to Rock Falls Sunday afternoon.  Funeral services Monday morning at 10 o’clock at the home of John Geiger.  Seventh Avenue, and 10:15 in the Rock Falls Lutheran church.  Rev. W. E. Krebs in charge.  Pall bearers, four brothers and two former schoolmates.”

According to the 1920 U.S. Census for Montmorency Township, Whiteside County, IL the household members were:

According to the 1940 U.S. Census for Miles Town, Iowa Township, Jackson County, IA the household members were:

According to the 1950 U.S. Census for Bureau Township, Bureau County, IL, the household members were:

According to the Northwest Herald (Woodstock IL) Thursday, September 13, 1990, page 14:

GRAYSLAKE – Clarence J. Fischer Sr., 78, died Wednesday, Sept. 12, 1990, at St. Therese Medical Center, Waukegan, following a brief illness.
He was born in Rock Falls, Sept. 3, 1912, and made his home in Grayslake over 38 years.
For 38 years he owned and operated Fischer’s Barber Shop.  He retired in 1976.
A charter member of Shepherd of the Lakes Lutheran Church in Grayslake, he served as president of its Senior Shepherds and was a former member of the Grayslake Grammar School Board of Directors.
Survivors include his wife, Esther (Hildebrand) Fischer; a daughter, Denise (Thomas) Simon of Johnsburg; a son, Clarence J. (Esther) Fischer Jr. of League City, Texas; six grandchildren, Rhonda, Ruth and David Fischer and Michelle, Aimee and Peter Simon; a great-granddaughter, Samantha MorningStar; and a sister, Jean Jones of Rock Falls.
A son, Gregory E. Fischer, preceded him in death on Aug. 5, 1964.
Friends may call from 6 to 9 p.m. Friday at Strang Funeral Chapel, 410 E. Belvidere Road, Grayslake, and at the church one hour prior to the service.
The Rev. Ross Zeller will officiate at the funeral at 11 a.m. Saturday at Shepherd of the Lakes Lutheran Church, Washington Street and Route 83 in Graylake (sic).  Interment will be in Fort Hill Cemetery in Round Lake.”