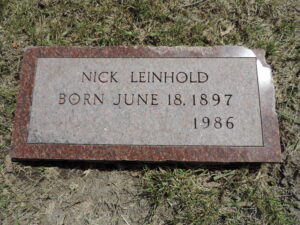 According to the Illinois, Federal Naturalization Records, 1856-1991:

State of Illinois,} ss:
County of Cook,}                                                   In the Superior Court of Cook County.
I, Nikolaus Leinhold, age 25 years, occupation Terre Cotta Marker, do declare on oath that my personal description is: Color white, complexion dark, height 5 feet 5 inches, weight 148 pounds, color of hair brown, color of eyes blue, other visible distinctive marke none.  I was born in Vel Kinda, Jugo Slavia on the 18 day of June, anno Domini 1897: I now resided at 2712 Magnolia Ave., Chicago, Ill.  I emigrated to the United States of America from St. John, Canada on the vessel C. P. Ry. F?? ?? ??; my last foreign residence was Vel Kinda Jugo Slavia; I am married; the name of my wife is Sussana; she was born at Jugo Slavia and now resides at Chicago, Illinois.  It is my bona fide intention to renounce forever all allegiance and fidelity to any foreign prince, potentate, state, or sovereignty, and particularly to kingdom of the Serbs, Croats and Slovenes, of whom I am now a subject; I arrived at the port of Detroit, in the States of Michigan, on or about the 26 day of Jan, anno Domini 1921; I am not an anarchist; I am not a polygamist nor a believer in the practice of polygamy; and it is my intention in good faith to become a citizen of the United States of America and to permanently reside therein: SO HELP ME GOD.
signed: Nickolaus Leinhold

According to the 1930 U.S. Census for Chicago City, Cook County, IL living at 4836 Henderson St., the household members were:

According to the 1950 U.S. Census for Round Lake Beach, Avon Township, Lake County, IL, the household members were: