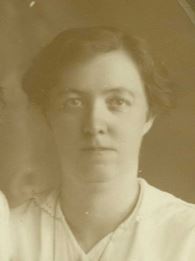 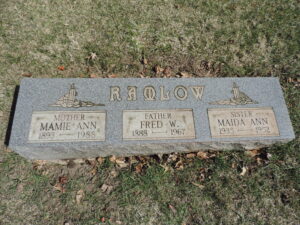 According to the Pantagraph (Bloomington IL) Wednesday, September 27, 1944, page 5:

“Middletown Woman Dies in Car Crash – Four Others Hurt in Wreck Near Chicago – LINCOLN. – (PNS) – Mrs. Mary Catherine Mills, 90, wife of William Mills, 92, of Middletown was fatally injured and her husband, son in law, Fred Ramlow, and his two daughters Louisa May Ramlow, 24, and Mada Ann Ramlow, 9, were injured Monday afternoon in an automobile accident on U. S. route 66 near Braidwood.  Mrs. Mills died at 6:30 p. m. Monday in St. Joseph’s hospital, Joliet where the injured were taken.  A tire on the Ramlow car in which they were enroute to Chicago is said to have blown out and caused the car to skid and turn over several times in a ditch.  Mr. Mills was badly shaken up.  Mr. Ramlow received a scalp wound and severe sprains while the eldest Ramlow girl was seriously injured.  Mada Ann escaped with minor injuries.  All except Louisa May were able to leave the hospital and go to the Ramlow residence in Chicago.  Mrs. Mills was born March 17, 1854, in Kentucky.  Surviving are her husband and following children: Alfred Mills, Hiseville, Ky.; James Mills, Mrs Lulu Allen, Middletown and Mrs. Edith Allen, Ojust, Fla.  There are also 48 grandchildren and three great great grandchildren.  The body was brought to the Wright Funeral home in Lincoln Tuesday morning.  The funeral will be held at 2 p. m. Thursday at the Middletown Methodist church.  Interment will be in Richmond Grove cemetery near New Holland.”

“LOUISE MAY NAVARRO, 71, OF Riverview died Thursday at Humana Hospital Brandon.  A native of Illinois, she had lived in the Tampa Bay area six years, coming from Illinois.  She was a homemaker and a Protestant.  She is survived by her husband, Bonifaco, and one brother, Fred Ramlow of Riverview.  Hamilton Funeral Home, Riverview.”

“Decorated with the air medal for duty while in Viet Nam was Frederick Ramlow Jr., an air force technical sergeant and the son of Mrs. Mamie Ramlow, 7184 Hillendale dr., Round Lake.
Sgt. Ramlow, an inflight refueling operator was cited for his outstanding airmanship and courage on missions completed under hazardous conditions.
He now is assigned to a unit of the Strategic Air command stationed at Kincheloe air force base, Mich.”

“RAMLOW, Frederick “Fred” Jr., 73, of Riverview passed away August 7, 2003.  He is survived by his wife, Joann; sons, Frederick Bryon of Brandon and Derek of Riverview and four grandchildren.  Mr. Ramlow served in the US Air Force for 27 years and owned Sunrise Auto in Riverview for 25 years.  A memorial service will be held 7 p.m. Monday evening from the Gibsonton United Methodist Church, 6104 Marilla Ave. with Reverend Wayne Kato officiating.

According to the 1900 U.S. Census for Magistrial District No. 2, Metcalfe County, KY the household members were:

According to the 1910 U.S. Census for Hiseville, Barrin County, KY the household members were:

According to the 1920 U.S. Census for Prairie Creek Township, Logan County, IL the household members were:

According to the 1930 U.S. Census for Chicago City, Cook County, IL living at 3145 Fulton Street, the household members were:

According to the 1940 U.S. Census for Chicago City, Cook County, IL living at 359 East 26th Street, the household members were: