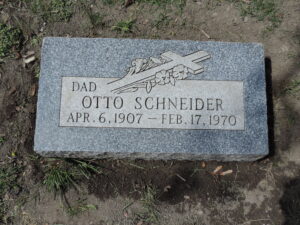 According to the Strang Funeral Home of Antioch obituary:

“ELLA M. KNISELY
(February 18, 1913 – July 24, 2006)
Ella M. Knisely, 93 years old of Round Lake Beach, IL, formerly of Antioch passed away Monday, July 24, 2006 at Hillcrest Nursing Center, Round Lake Beach.  She was born February 18, 1913 in Germany the daughter of the late Anton and Lucille (Gewerth) Fuchs, moving to Chicago in 1921.  In 1953 she moved to Antioch and in 2001 she settled in Round Lake Beach.  Ella worked for many years as an inspector for Baxter Laboratories before her retirement in 1975.  She had attended St. Peter Church in Antioch, was a member of the AARP, and enjoyed playing pinnacle and crocheting afghans.
Survivors include four children; Richard (Jean) Schneider of Manitowish Waters, WI, Elaine (Lonnie) Eslinger of Antioch, Charlene (Michael) McGreal of LaCrosse, WI, and Fred Schneider of Zion, IL; nine grandchildren, 15 great grandchildren, many nieces, nephews and friends.  In addition to her parents she was preceded in death by her husbands: Otto Schneider and George Knisley, and four brothers; Joe Fox, Adolph Fox, Hubert Fox, and Leo Fox.
Funeral services will be held 10:30 AM Wednesday July 26, 2006 at the Strang Funeral Home of Antioch 1055 Main St. (Rte 83) Antioch, IL with visitation starting at 9:30 AM.  Interment will follow in Home Oak Cemetery, Antioch.  In lieu of flowers, those desiring may make donations to Condell Hospice in her memory.  Please sign our guestbook at www.strangfh.com.”

According to the Good For Life Funeral Home website:

According to the Strang Funeral Home of Antioch website:

“Elaine Eslinger, 83 years old of Antioch, IL and Manitowish, Waters, WI passed away Monday, December 13, 2021. She was born July 12, 1938 in Chicago, IL, the daughter of the late Otto and Ella (nèe Fuchs) Schneider, moving to Antioch in 1952. On December 18, 1954, she married Lonnie Eslinger in Fox Lake, IL. Together they owned and operated Eslinger and Sons Landscaping for over 30 years. Her hobbies included watercolor painting and gardening. She loved cooking and entertaining friends and family as frequently as possible, especially at their home in Manitowish Waters.
Survivors include her son, Jason of Chicago, IL; a grandson, Casey (Kathryn) and her great-granddaughter, Aubrie; a brother-in-law, Mike McGreal; a sister-in-law, Jean Schneider; many close nieces, nephews, and a multitude of friends. She was preceded in death by her parents; husband Lonnie, her son, Gary and infant son; one sister, Charlene McGreal; and two brothers; Richard and Fred Schneider.
As were her wishes, services will be private. Arrangements were entrusted to Strang Funeral Home, 1055 Main St., Antioch, IL 60002. For additional information, call 847-395-4000. Donations can be made in Elaine’s to the Alzheimer’s Association, 225 N. Michigan Ave., Floor 17, Chicago, IL 60601. Please sign the online the guestbook for Elaine at www.strangfh.com.”

“Charlene J. McGreal, 72, of Hazelhurst, WI passed away at her home on Friday March 27, 2015.
She is survived by her husband Mike, two children Mike McGreal and Michele (Joe Kroha) McGreal; three grandchildren, Shane, Kaisha and Luke McGreal; a sister Elaine Eslinger and two brothers, her twin Fred Schneider and Rich (Jean) Schneider.
A luncheon & celebration of Char’s life will be held on Friday, April 3, 2015 from 1-4 pm at Gaslite, 7255 Bradley Street, Lake Tomahawk, Wisconsin. Questions please phone Michele (715) 499-0425.
To send flowers or a memorial gift to the family of Charlene J McGreal please visit our Sympathy Store.”

According to the Illinois, Federal Naturalization Records, 1856-1991:

“Petition for Naturalization – To the Honorable the District Court of The United States of Chicago, Illinois.  The petition of Otto Schneider, hereby filed, respectfully shows: (1) My place of residence in 1860 Maud Ave., Chicago, Ill. (2) My occupation is chauffeur (3) I was born in Kaiserlautern, Germany on April 6, 1907.  My race is German (4) blank (5) I am married. The name of my wife is Ella, we were married on May 5, 1935 at Chicago, Ill.; she was born at Ludwikowka, Poland on February 20, 1913; entered the United States at New York, N. Y. on December 20, 1920 for permanent residence therein and resides with me.  I have 2 children, and the name, date, and place of birth, and place of residence of each of said children are as follows: Richard born February 16, 1936; Elaine, June 12, 1938; both born in and residing in Chicago, Ill.  My wife is a U.S. citizen through the naturalization of her father, Anton Fuchs, admitted U. S. Dist. Ct., February 24, 1928, Chicago, Ill.  (6) My last foreign residence was Machenbach, Germany.  I emigrated to the United States of America from Hamburg, Germany.  My lawful entry for permanent residence in the United States was at New York, N. Y., under the name Otto Schneider on January 31, 1928, on the vessel SS New York as shown by the certificate of my arrival attached hereto. (7) blank (8) I am able to speak the English language (9) I have resided continuously in the United States of America for the term of 3 years at least immediately preceding the date of this petition, to wit, since January 31, 1928 and in the County of Cook this State, continuously next preceding the date of this petition, since February 1, 1928.  Petition filed under Section 2, Act, September 22, 1922 as amended.  Signed: Otto Schneider on September 7, 1939.”

According to the 1940 U.S. Census for Chicago, Cook County, IL living at 1860 Maud Avenue, the household members were:

According to the 1950 U.S. Census for Chicago, Cook County, IL living at 1860 Maud, the household members were: