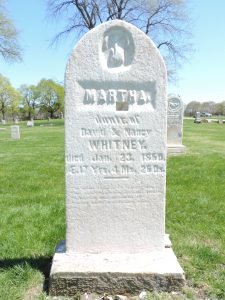 “In the name of God, Amen I David Whitney of the town of Avon in the County of Lake and State of Illinois – Being of Sound mind and memory – Blessed be Almighty God for the Same – do make and publish this my last will and testament.
I give and Bequeath to Amelia – Cordelia my two first dauters and too my sons Harvey Levi John and David Jr ten dollars each
I give to my youngest Daughter Martha Five Hundred dollars
I also give and bequeath to my Beloved Wife all my Household furniture and all the rest of my personal property after perging  from the same the several legacies already name to be Hers for ever – But if there should not be at my decease sufficient personal property to pay the afforsaid legacies then so much of my real estate shall be sold as will raise sufficient money to pay the same
I also give and bequeath to my Beloved Wife Nancy all the rest of my property and residue of my real estate as long as Her Natural life and at Her decease I give and Bequeath the same real estate to my two youngest Boys Allen and Arthur to Be divided Evenly  Between them – after paying the afforsaid Legacies.
I do nominate and appoint my wife Nancy and James Kapple to be the Sole Executrix of this my last will and testament
In testimony whereof I Here unto Set my Hand and seal and publish and Decree this to Be my last will and testament in presence of the witnesses named Below this this thirteenth day of…” (NOTE: Next page not available for transcription)

“Mrs. Cordelia C. Cheney died October 26th at Colorado Springs, Colo., to which place she moved about two months ago, from Lawrence, with her daughters, Mrs. Worden and Miss Cheney.  The remains were brought to this place last Thursday evening, accompanied by Mr. J. B. Gilbert.  Undertaker Hunt had charge of the funeral here.  The pall-bearers were chosen among old acquaintances of the deceased.  The burial was in the family lot in Prospect Hill cemetery, at which place Rev. Mr. Moyer conducted a short service.  Mrs. Cheney was 77 years, 3 month and 3 days old.  She is kindly remembers by the old settlers of the community.”

(NOTE: According to the 1850 U.S. Census, Harvey along with his wife, Eliza A, and his two children, Louisa and Agnes were living in Avon Township, Lake County, IL.  His occupation was a blacksmith.)

“The friends of Capt. and Mrs. Levi Whitney, of Avon, will learn with keen regret of the death of their only son, Orville, which occurred on Tuesday, of this week.  for some time past, he had been failing in healthy, but until the last it was hoped that he might recover and outgrow the difficulty.”

According to the McHenry Plaindealer (McHenry IL) Wednesday, August 12, 1885, page 5:

“Levi Whitney is finishing a large new house on his farm east of Hainesville.”

“Levi Whitney, for years a resident of this city but of late years residing with his daughter, Mrs. Frank Miller, in Chicago, died at that place this week Tuesday.  The remains were shipped to Libertyville Thursday and interred in the family lot in Lakeside cemetery.”

According to the Cook County, IL Death Index:

According to the Indianapolis Journal (Indianapolis IN) Sunday, January 31, 1904, page 2:

“MARION, Ind., Jan. 30. – Three aged soldiers, members of the Marion Soldiers’ Home, died to-day.  They were George Buehler, died to-day.  They were George Buehler, aged ninety, who served in B Company, Indiana Cavalry; Lorenzo Rolfe, aged seventy-five, who belonged to G Company, Twenty-Sixth New York Infantry; John Whitney, aged seventy-five, who was a member of the First Massachusetts sharpshooters.  They will be buried in the “Silent Circle” at the Home.”

According to the Find a Grave website (findagrave.com) Memorial #2865447 for John G. Whitney, created by “US. Veterans Affairs Office” and maintained by “DaurRegt”:

“On 19 Nov 1862 John G. Whitney, a sailor, mustered into service with the 1st Company Massachusetts Sharpshooters, being credited to the quota of Boston, Massachusetts. He was 33 years and 7 months old.
He served in the 1st MA Sharpshooters under the alias of “John Arnott,” according to his pension file.
On 25 Apr 1863 John ended military service with the 1st Massachusetts Sharpshooters at Falmouth, Stafford County, Virginia, being discharged for disability.
On 27 Oct 1888, John was admitted, from Illinois, to the National Home for Disabled Volunteer Soldiers (Northwestern Branch), Milwaukee, Milwaukee County, Wisconsin.
In 1888 At the time of his entry into the Soldiers’ Home, he gave his next-of-kin as:
Mrs. Amelia (Whitney) Fuller, b. ca 1825 in New York, who married Russell Fuller before 1850, (he b. ca. 1821 in Ohio), and they later lived in Willoughby, Lake County, OH.
In the following years, John lived in different Soldiers’ homes in Virginia, where he applied for his pension, and Wisconsin, returning eventually to Indiana.
John died on 29 Jan 1904 at National Home for Disabled Volunteer Soldiers, Marion, Indiana, unmarried. He was 74 years and 9 months old.”

“After the war, Allen B. Whitney of the 96th returned to civilian life and made his living as a baker.”

According to “History of the Ninety-sixth Regiment, Illinois Volunteer Infantry” by Charles A. Partridge. Chicago. 1887:

“Captain Allen B. Whitney. Age 28; born in Willoughby, Ohio: sailor; enlisted from Avon; was elected Second Lieutenant at the organization of the Company; promoted to First Lieutenant Jan. 6, 1863, and to Captain Feb. 17, 1863; resigned Jan. 8, 1864, on account of ill health: recovering, he re-enlisted as a private Oct. 10, 1864, and rejoined the Regiment at Nashville, Tenn., just prior to the battle of December 15 and 16, in which he participated; returned home with Regiment; died in Chicago, Feb. 19, 1879.”

WHITNEY – At his residence, No. 78 North Carpenter street of pulmonary consumption.  Captain Allen B. Whitney, aged 45 years.
Captain Whitney served during the war of the rebellion as captain of Company B, Ninety-sixth Illinois Volunteer Infantry.
Notice of funeral in to-morrow’s papers.”

WHITNEY – The funeral services of the late Captain Whitney will take place to-day, at 9 a. m. at 78 North Carpenter street.  His remains will be taken to Lake County, and members of the Ninety-sixth Regiment, Illinois Volunteers, are invited to attend as escort to the cars.”

“SWORD PRESENTATIONS. – We learn, that on Tuesday evening last, some of the liberal citizens in the Town of Avon, met at the Doolittle School House, and presented to Captain Salisury and Lieut. Whitney, officers of the fine company which volunteered from that town principally, each a beautiful Sword, as testimonials of the high appreciation in which they are held by the citizens from whose midst the noble Company over which they are placed, has been drawn.  Success to Old Avon and her fine Company of Volunteers.”

“The 96th Ill. Regiment
We learn from Capt. A. B. Whitney of the 96th, who is at home on sick furlough, that the regiment moved to Knoxville, on the 24th Ult., from their former quarters.  We regret to learn that Capt. A. Z. Blodgett was too unwell to move with the regiment.”

The friends and former comrades of Capt. Allen B. Whitney were pained to learn, about a week since, that he had finally succumbed to the disease which had so long oppressed him and was no more.  For some years past he has resided in Chicago and all of the time he suffered from a lung difficulty.  Formerly he resided in Hainesville, in this county.  In the summer of 1862 he enlisted with many others and upon the organization of his command was elected Second Lieutenant of Co. B., 96th Regt., Ill., Volunteers.  Subsequently he was promoted to Captain, but resigned his commission in the winter of 1863-4.  Returning home he remained for a few months, but during the autumn of 1864 enlisted as a private in the Company which he formerly commanded.  During this term of service his health suffered to some extent and it is probable that the seeds of consumption were sown in his system during that period.  He was a man of generous impulses and warm in his affections.  During the last few weeks of his illness he suffered greatly.  Last Saturday morning a large number of his former comrades escorted the remains to the St. Paul depot, in Chicago, whence they were taken, via Gurnee, to Hainesville, for interment.  Four of the former members of the Regiment went out from Waukegan and attended the body to its last resting place at Gray’s Lake Cemetery.  The funeral services were conducted by Rev. Mr. Gilbert and were attended by a large number of his former neighbors and friends.  Capt. Whitney was 44 years of age.  A wife and four children survive him.”

According to the 1850 U.S. Census for the Town of Avon, Lake County, IL, the household members were: