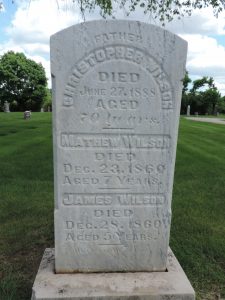 NO ARREST HAVE BEEN MADE

Mrs. Frank Smith, who was assaulted last Monday noon at her home seven miles from Milford, died last night at 11 o’clock.  Through most of the two days preceding her death Mrs. Smith was unconscious and she could not reveal the identity of her assailant, who Has now by her death become a murdered (sic).  Previous to sinking in this last stage of helplessness the wounded woman refused to define her assailant and now only circumstantial evidence remains upon which the officials may base their possible charges against anyone.
Coroner Wertman left Milford late this forenoon for the Smith home where an inquest was held this afternoon.  The coroner’s jury had not completed its deliberations at the last reports.

No arrests have been made.  Strong suspicions were at first entertained but it is said that these suspicions have weakened no small agency in this matter being the assertion that Mrs. Smith had always been treated with the utmost care by those with whom she constantly came in contact.  Sheriff Gillan, of Seward county is thought to have something up his sleeve in the case; some circumstance which has not been revealed for he stated Wednesday that no arrests would be made until after an inquest had been held.  From the evidence secured at that time by the interested persons in Dorchester, Milford and Seward it was deemed improbable that anyone would be arrested, however.
Mrs. Frank Smith was 58 years old.  She had one son Eugene, 24 years of age, who lived with his parents.  The murdered woman’s husband, Frank Smith, is about 64 years old and wealthy farmer.
The assault, which has now become murder, was committed Monday noon.  The weapon used was a single-tree.  The tug-hook and a nail in the end of the hickory stick cut deep gashes in the woman’s scalp and the wood crushed the side of the skull caused Mrs. Smith to be unconscious most of the time and so disordered the nervous centers that she was a no time able to speak.

The injured woman was found by her son late in the afternoon.  The husband was away on a business deal at the time and was summoned to the house by telephone.  Sheriff Gilian, of Seward, was immediately notified, and Detective Malone sent his dogs, in charge of ‘Jack” Fouts, to the farm, where they rendered excellent service but developed clues that puzzled the officials.
With Mrs. Smith’s death, the murderous assault takes on a deeper shade of mystery.  With the determination of the officials to make no arrest until after the inquest, it is thought that some facts have been had that will produce an entirely different appearance in the case.  The officials have not, so far as know, changed their ideas in regard to the identity of the person committing the assault.”

Services for Mrs. Orpha Wilcox, 82, life-long resident of Antioch, were held Wednesday afternoon at 2 o’clock from the Strang Funeral home, with burial in Hillside cemetery, The Rev. W. C. Henslee officiated.
Mrs. Wilcox, who had been ill with a heart ailment since Nov. 27, passed away Sunday at the home of a daughter, Mrs. Walter (Alida) Douglas, Villa Park, Ill.
In addition to her daughter, she is survived by her husband, John”

Surviving his wife, Mrs. Orpha Wilcox by only 17 days, John Wilcox, 89, passed away at 1:30 a. m. Wednesday, at the home of a daughter, Mrs. Walter (Alida) Douglas, villa Park, with whom they had resided.  Mrs. Wilcox died Dec. 5, at the age of 82.
Funeral services are to be held Friday at 1 p. m. in the Strang Funeral home, Antioch, with the interment in Hillside cemetery.  The Rev. W. C. Henslee will officiate.

The decease, who was a retired farmer, had been a life-long resident of Antioch township.
He was born here Oct. 8, 1854 and was the son of Eliza and Levi Peter Wilcox, who were pioneer settlers.”