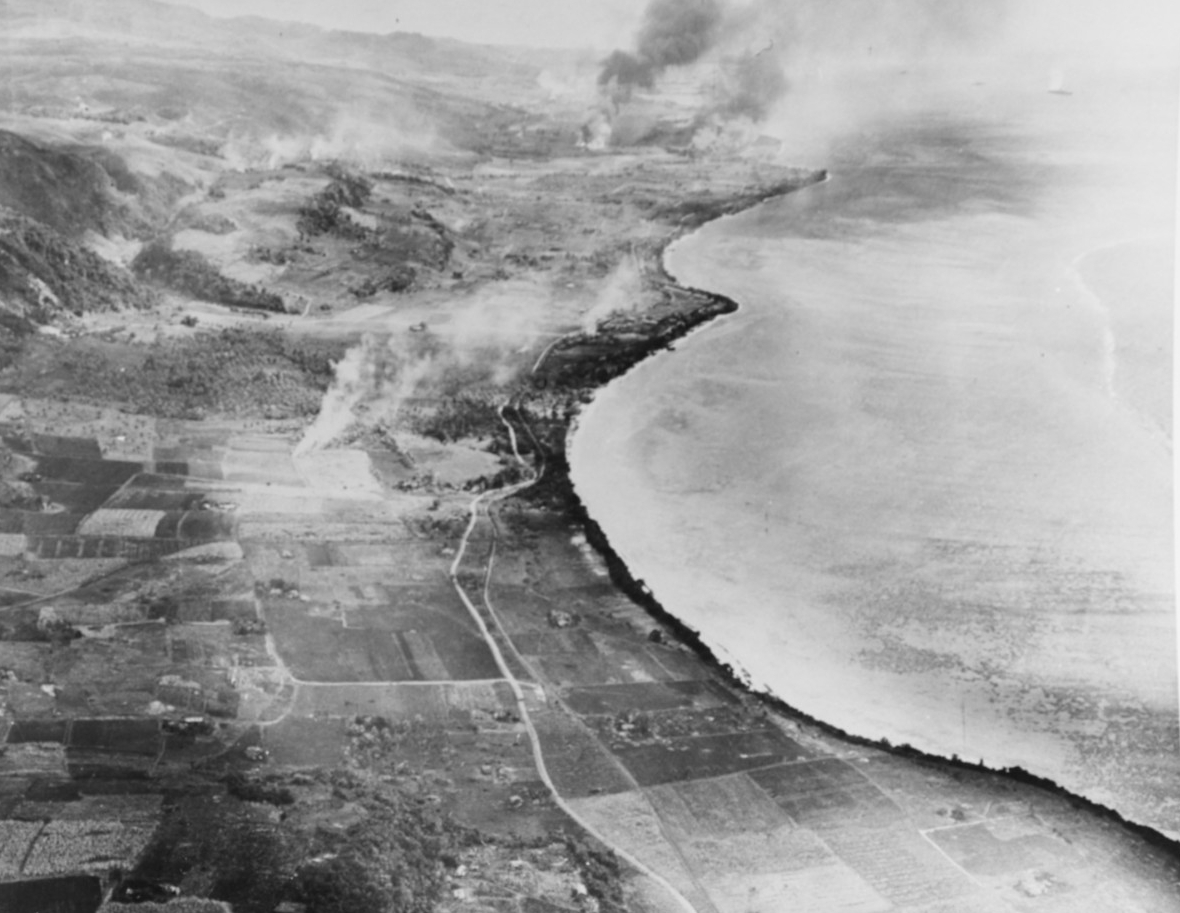 PFC Clarence LeRoy Hagen, Jr., a member of the 2nd Marine Division of the Navy, was killed in action during the opening days of the Battle of Saipan on June 17, 1944 at the young age of 19.  Four years and 8 months after his death his remains were finally put to rest in the Fort Hill Cemetery on February 5, 1949.

On June 15, 1944, the 2nd Marine Division boarded one of many “landing ship tanks” that transported troops, supplies and ammunition to the beach of the island of Saipan.  The roughly 27 minute trip from ship to shore, the first wave of troops landed at 8:40 a.m.  8,000 Marines landed in 20 minutes and by the evening, 20,000 Marines were ashore.  Over the next 24 days, a total of 2,949 would lose their lives of which PFC Hagen was one of them.

On June 15, 1944, during the Pacific Campaign of World War II (1939-45), U.S. Marines stormed the beaches of the strategically significant Japanese island of Saipan, with a goal of gaining a crucial air base from which the U.S. could launch its new long-range B-29 bombers directly at Japan’s home islands. Facing fierce Japanese resistance, Americans poured from their landing crafts to establish a beachhead, battle Japanese soldiers inland and force the Japanese army to retreat north. Fighting became especially brutal and prolonged around Mount Tapotchau, Saipan’s highest peak, and Marines gave battle sites in the area names such as “Death Valley” and “Purple Heart Ridge.” When the U.S. finally trapped the Japanese in the northern part of the island, Japanese soldiers launched a massive but futile banzai charge. On July 9, the U.S. flag was raised in victory over Saipan.

In the spring of 1944, U.S. forces involved in the Pacific Campaign invaded Japanese-held islands in the central Pacific Ocean along a path toward Japan. An armada of 535 U.S. ships with 127,000 troops, including 77,000 Marines, had taken the Marshall Islands, and American high command next sought to capture the Mariana Islands, which formed the critical front line for Japan’s defense of its empire.

U.S. commanders reasoned that taking the main Mariana Islands–Saipan, Tinian and Guam–would cut off Japan from its resource-rich southern empire and clear the way for further advances to Tokyo. At Saipan, the island nearest to Japan, U.S. forces could establish a crucial air base from which the U.S. Army’s new long-range B-29 Superfortress bombers could inflict punishing strikes on Japan’s home islands ahead of an Allied invasion.

American commanders decided to make the first Mariana landing on Saipan, the largest of the Mariana Islands. Saipan, which had been under Japanese rule since 1920, had a garrison of approximately 30,000 Japanese troops, according to some accounts, and an important airfield at Aslito. Marine General Holland M. “Howlin’ Mad” Smith (1882-1967) was given a plan of battle and ordered to take the island in three days. After the invasion of Saipan, according to the plan, U.S. forces would quickly move to seize Guam and Tinian. However, American intelligence services had greatly underestimated Japanese troop strength on Saipan.

The Landing and First Phase of the Battle

On the morning of June 15, 1944, a large fleet of U.S. transport ships gathered near the southwest shores of Saipan, and Marines began riding toward the beaches in hundreds of amphibious landing vehicles. Battleships, destroyers and planes had pounded key targets in pre-assault bombardments, but they had missed many gun emplacements along the beach cliffs. Subsequently, Marines headed straight into exploding bombs and streaming gunfire.

In “Breaching the Marianas: the Battle for Saipan,” author John C. Chapin, a Marine on Saipan, described the chaos around him that morning, with its “bodies lying in mangled and grotesque positions; blasted and burned out pillboxes; the burning wrecks of LVTs [landing vehicles] …; the acrid smell of high explosives; the shattered trees; and the churned up sand littered with discarded equipment.”

Despite the heavy resistance they faced, 8,000 Marines managed to reach the shore that first morning. By the end of the day, some 20,000 troops had established a beachhead on Saipan; however, the U.S. had suffered approximately 2,000 casualties in the process. The next morning, the troops were joined by U.S. Army reinforcements and began pushing inland toward Aslito Airfield and Japanese forces in the southern and central parts of the island. On June 18, American troops continued to spread out across the island even as their offshore naval protection departed to head off the Japanese Imperial Fleet that had been sent to aid in the defense of Saipan.

After having failed to stop the American landing on Saipan, the Japanese army retreated to Mount Tapotchau, the mountain peak that dominates the island. Located at the center of Saipan, Mount Tapotchau is the island’s highest point, rising some 1,550 feet. In intensive fighting, U.S forces gradually drove the Japanese defense from their nearly impregnable position in the heights. As the battle raged, Smith ordered a contingent of troops to assault Japanese positions by moving across a large, much exposed valley. Soon to be designated “Death Valley,” the area was bordered by a ridge where well-protected, heavily armed Japanese soldiers fired directly down on the approaching Americans. The Marines dubbed the ridge “Purple Heart Ridge” for the many American casualties sustained there. Fighting their way through rugged jungle terrain, Marines finally won control of Mount Tapotchau by the end of June. The Japanese were forced to retreat further north, marking the turning point in the Battle of Saipan.

By early July, the forces of Lieutenant General Yoshitsugu Saito (1890-1944), the Japanese commander on Saipan, had retreated to the northern part of the island, where they were trapped by American land, sea and air power. Saito had expected the Japanese navy to help him drive the Americans from the island, but the Imperial Fleet had suffered a devastating defeat in the Battle of the Philippine Sea (June 19-20, 1944) and never arrived at Saipan. Realizing he could no longer hold out against the American onslaught, Saito apologized to Tokyo for failing to defend Saipan and committed ritual suicide.

Before his death, however, Saito ordered his remaining troops to launch an all-out, surprise attack for the honor of the emperor. Early on the morning of July 6, an estimated 4,000 Japanese soldiers shouting “Banzai!” charged with grenades, bayonets, swords and knives against an encampment of soldiers and Marines near Tanapag Harbor. In wave after wave, the Japanese overran parts of several U.S. battalions, engaging in hand-to-hand combat and killing or wounding more than a thousand Americans before being repelled by howitzers and point-blank machine-gun fire. It was the largest banzai charge of the Pacific war, and, as was the nature of such an attack, most Japanese troops fought to their death. However, the suicidal maneuver failed to turn the tide of the battle, and on July 9, U.S. forces raised the American flag in victory over Saipan.

Aftermath of the Battle

The brutal three-week Battle of Saipan resulted in more than 3,000 U.S. deaths and over 13,000 wounded. For their part, the Japanese lost at least 27,000 soldiers, by some estimates. On July 9, when Americans declared the battle over, thousands of Saipan’s civilians, terrified by Japanese propaganda that warned they would be killed by U.S. troops, leapt to their deaths from the high cliffs at the island’s northern end.

The loss of Saipan stunned the political establishment in Tokyo, the capital city of Japan. Political leaders came to understand the devastating power of the long-range U.S. bombers. Furthermore, many of Saipan’s citizens were Japanese, and the loss of Saipan marked the first defeat in Japanese territory that had not been added during Japan’s aggressive expansion by invasion in 1941 and 1942. Worse still, General Hideki Tojo (1884-1948), Japan’s militaristic prime minister, had publicly promised that the United States would never take Saipan. He was forced to resign a week after the U.S. conquest of the island.”